One problem I ran into with my award medallion project is how to make metal purple. Because Calontir likes purple. A lot. After digging around, I came up with four possible plans:

This was my first choice, as it both looks pretty and fits into the time period of the SCA. After some modifications to my soldering station and a promising test on scrap copper, I took one of my newly cast Golden Swan medallions and went to work.

A layer of enamel was applied and things looked good. The medallion was set aside to cool. While I was cleaning up other parts of the shop, I started hearing a faint little "Ting! Ting!" coming from the soldering tray. All of the beautiful enamel was popping off! Which lead to the first lesson from this project: coefficient of thermal expansion.
Most of the enamels you see for sale are "medium temperature medium expansion". These are designed with copper, gold, and silver in mind. Since the brass I was trying to use is an alloy of 60% copper and 40% zinc/tin (Rio Grande doesn't specify), the expansion properties no longer matched that of the base copper. When the enamel and copper start cooling down after being bonded, then shrink at different rates, causing the enamel to start popping off the brass.

I found two different possible ways to fix this, but haven't been able to try either of them. I found some mention of using Thompson's low temp high expansion metal on brass with success. However, it appears they stopped making that kind of enamel and I haven't found another supplier. The other option is to use a brass alloy called "gilding metal."

Gilding metal is 95% copper and 5% zinc, so it retains more of the expansion properties of copper. Thompson's enamel even carries sheets of it, so it appears to be an approved medium. Unfortunately, this only helps with the yellow medallions; I'll still have issues when it comes time to color medallions with a white base color, which I'll be using white bronze for. Since I would prefer all the medallions to have the same style, that's the end of the enamel experiments.


Note from future me: In addition to gilding metal, I have had success with using standard Thompson's enamels with 85/15 brass, which also goes by jeweler's brass or NuGold. It can fail if you try more advanced techniques like plique-a-jour, but works just fine for a basic surface layer. I have only seen this material in sheet form though, and none of the other casting alloys I have tried have enameled well.

Patina is my last option before I started feeling like I was cheating. While the exact formula may not be in period for the SCA, it is still an artistic-like metal technique, rather than just painting on some color.

When I was researching, I kept finding a purple patina recipe from https://www.sciencecompany.com/patina-formulas-for-brass-bronze-and-copper-W160.aspx#17 listed. The mix, by weight, is:
It should be noted that the ammonium hydroxide they list is 30% ammonia, while the ammonia you would buy for household cleaning is about 1%. Also, table salt also contains iodine, so some iodine-free salt needs to be used for the sodium chloride (like kosher, or some sea salts). Conveniently, they are a chemical supply company. This mix is supposed to be applied cold.

So, after ordering the chemicals I need and finally having an excuse to buy a full face respirator (ammonia is nasty stuff), I got my patina solution together. I cut off a small square of copper to use as a sample and started applying the patina. It took a few layers, but it eventually took on a good purple color. Unfortunately, it's hard to remove the green copper layer over the purple without removing the purple also. 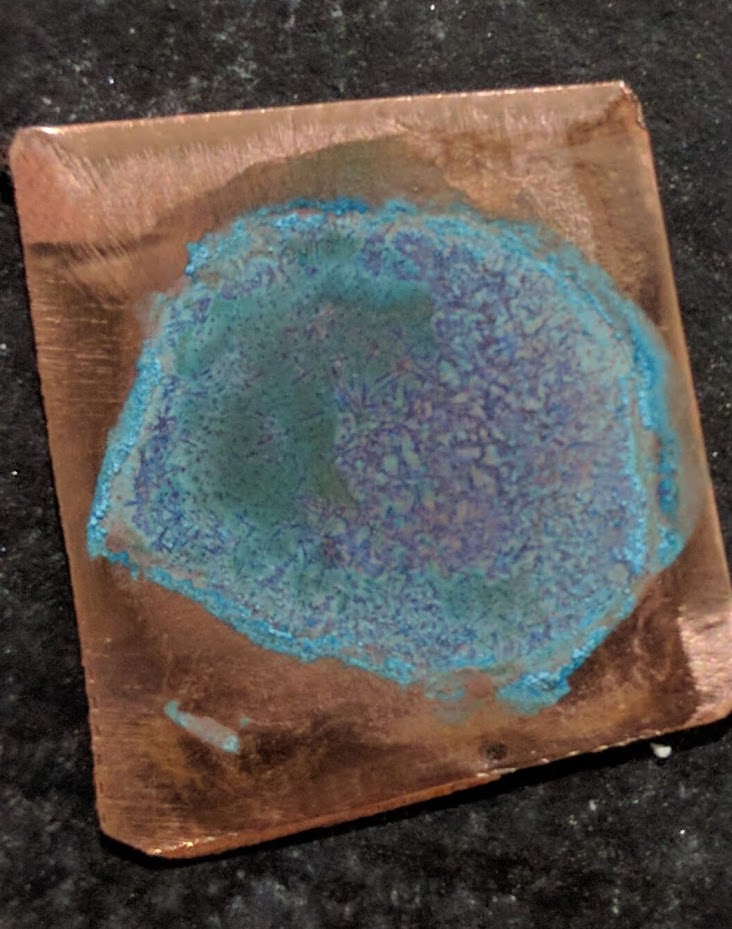 I went ahead and pulled out the failed swan medallion from before to use as a brass sample. Unfortunately, it didn't even come close to what the copper did. The swan took on the greenish tone without any of the purple. 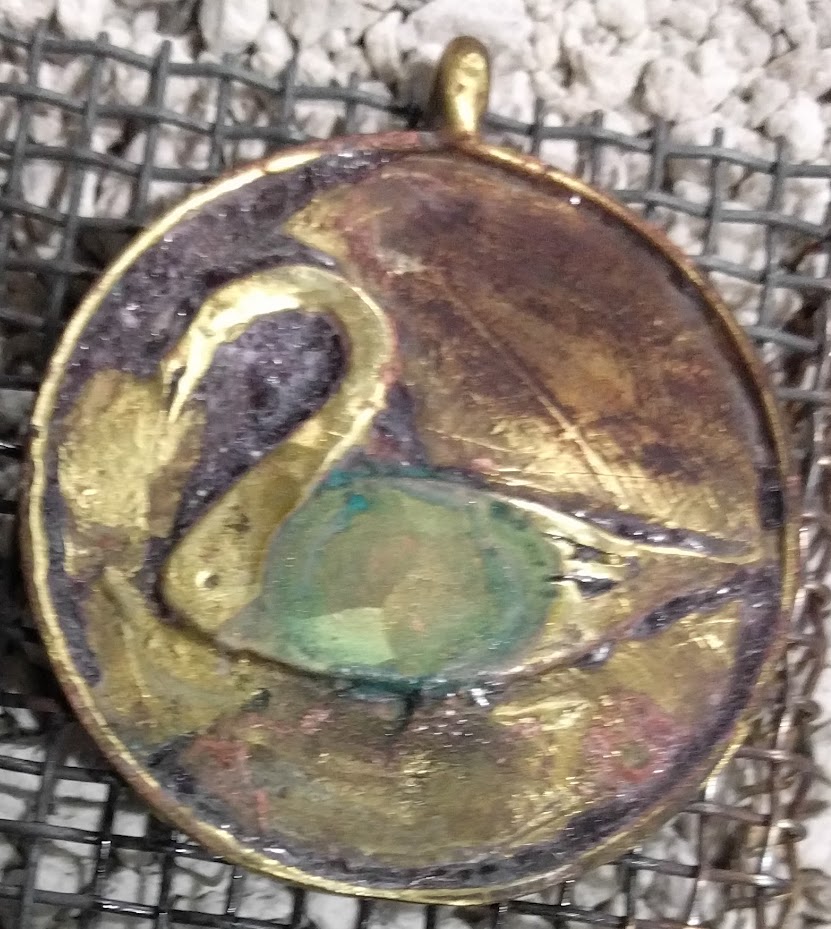 After ruling out the patina route, while I was writing up this post, I came across https://www.searlesart.com/copper-red-patinas/3889/ which has some promising results for purple patinas on straight copper using a hot patina. This may be something to experiment with in the future, but I still have two concerns. One is that patinas can be a little blotchy because of the process and I want a good, solid purple coming through. It's a heraldic badge, after all. Second, as we've seen, what works on copper doesn't always work on its alloys.

During my patina research, I came across some mention of Sculpt Nouveau Dye-Oxide patinas. I was hesitant to go this route, both because it's out of period and it feels like cheating. It looks like it has some form of metal oxide and a dye to color the oxide in it (hence the name), then probably some kind of surface adhesive. That's as much as I can tell from the MSDS that lists it as 50% water, 25% colored oxides, and 25% "trade secret." I'm justifying it to myself that since it contains the oxide, it is technically a patina still and not a paint.

Application is easy; toss it on a fireproof surface and give it a quick blast with a torch (or a heat gun). It should be hot enough that the patina forms almost instantly, but without the liquid boiling up.

The results were actually really nice. However, when I went back to apply my standard finish of paste wax, the solvent in the wax removed a good portion of the patina.
Pulling out a trick from college, I gave the medallions a blast of Krylon fixatif after the patina and before the solvent. That kept the patina in place, and gave a nice purple finish.

While I would (currently, probably) not use this technique for SCA projects, I have used this trick before in college on a project, so it's worth noting. It's pretty simple. Mix up two part epoxy and add a few drops of dye or food coloring. Apply. Sand as needed.

Again, not period, but it can give some decent results.
medallions metalwork patina 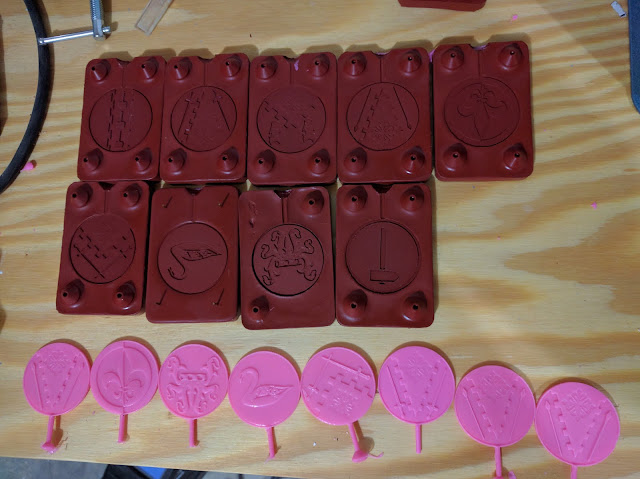